note: this post involves quite a bit of shameless bragging about my kids.

We rolled into Yosemite National Park as the sun was melting from the sky behind the mountains.
Windy roads through boulders and sky scraping trees, we came around the mountain and
BOOM.
The valley.
Greeted by canyon walls higher than I have ever seen, with El Capitan in front and Half Dome casting shadows in the background. It was beautiful, breathtaking, magnificent, grand, splendid, majestically impressive, and all sorts of other wonderful things that there are no words for.
We drove to our campsite, set up camp, and ate our dinner with a giddy anticipation of what was to come the next day.

Robby was dead set on hiking to the top of Yosemite Falls.
I was a little hesitant.....the furthest the kids have hiked before this was 7 miles (HERE), and while they are great little hikers, we had already been playing (at the beach) with cousins for the past few days and the kids were pretty pooped. We also had more hiking planned all day the next day and this hike was supposed to take 6-8 hours alone. I knew this trail was steep with lots of sunshine, so we just decided we'd see how far we could get, and cross our fingers we'd arrive at the top.
We had to laugh because on the little trail that took us TO the trailhead the kids were already mentioning how steep it was......ohhh great.
What are we doing? 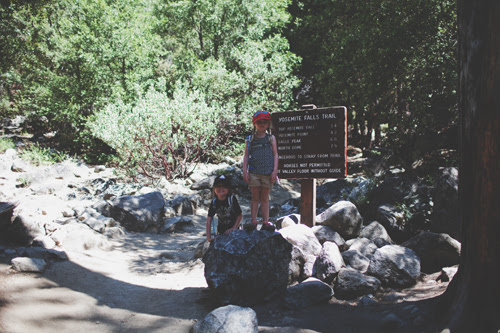 UP we went!
Through pines and boulders, stairs carved right into the stone.
Zigzagging back and forth with blue jays and chipmunks dancing about like a Disney cartoon.
With a little huffing and puffing we made it to the Columbia Rock overlook. We'd climbed about 1.5 miles and 1000ft and everyone was feeling great. We visited with other hikers--most of whom were turning back at this point and completely flabbergasted that we were taking our kids further up.
Seriously, what are we doing? 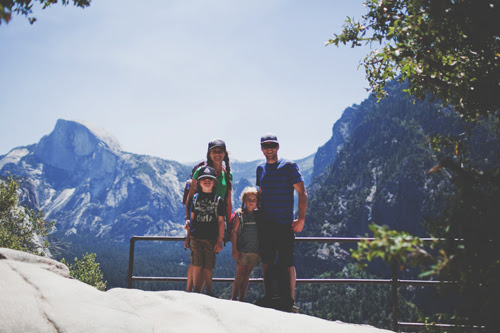 It was hot.
We were still in the shade of the forest but we stopped to fill our hats with water from the little waterfalls that dotted the trail. 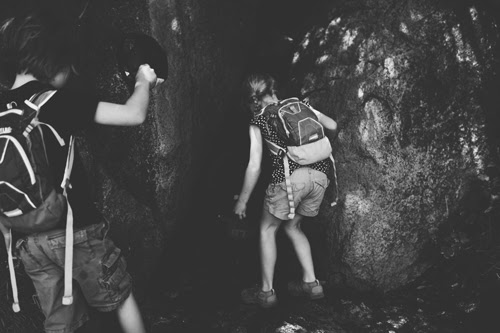 This valley is something you really need to experience if you ever have the opportunity. The walls are towering so high into the sky that's it's hard to get perspective with a camera. Snowfall was low this year, so the waters weren't rushing over the top--they'll most likely be dry by fall--but it was still such a powerful feeling hearing the roar as we got closer and closer to the falls.
The kids continued on with no problem at all.
none. it was weird.
Our shade eventually disappeared as we got closer, so we made sure they were drinking lots, stopped in what shade we could find for snack breaks and pressed on.
We passed several groups of adults--all with comments on how they couldn't believe these two kids were so far up.....
....and this only made the kids hike harder.
We then realized, all we have to do is feed their bellies, and their egos.....and these two might be able to go on for days!
"Good job guys!"
"You two are doing AWESOME!"
"How are you hiking so fast?!"
It was working. 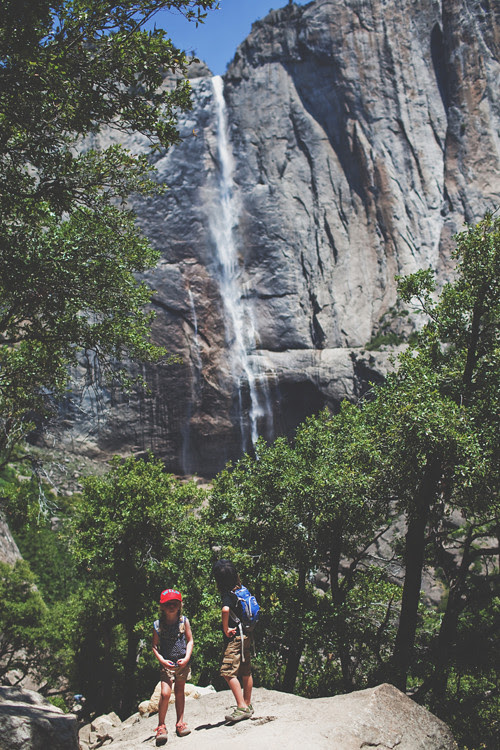 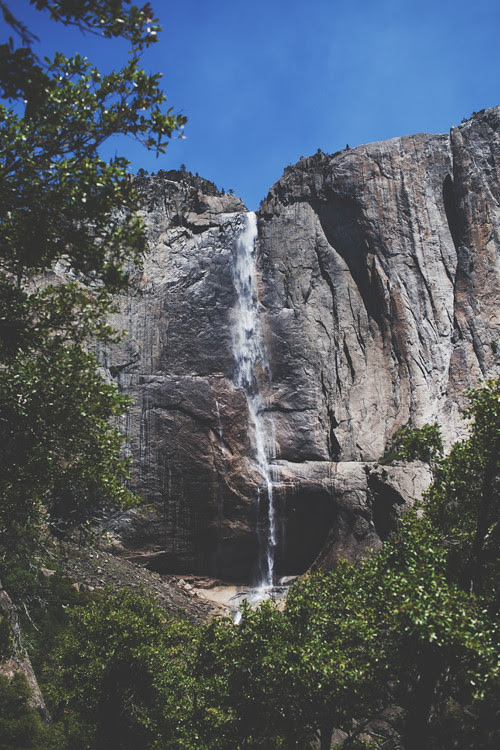 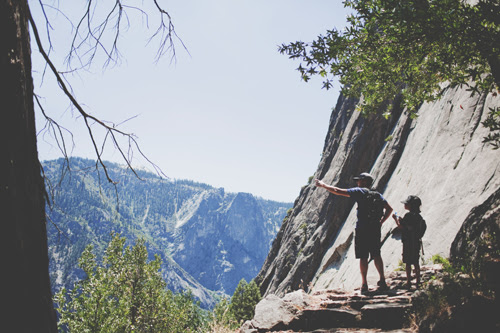 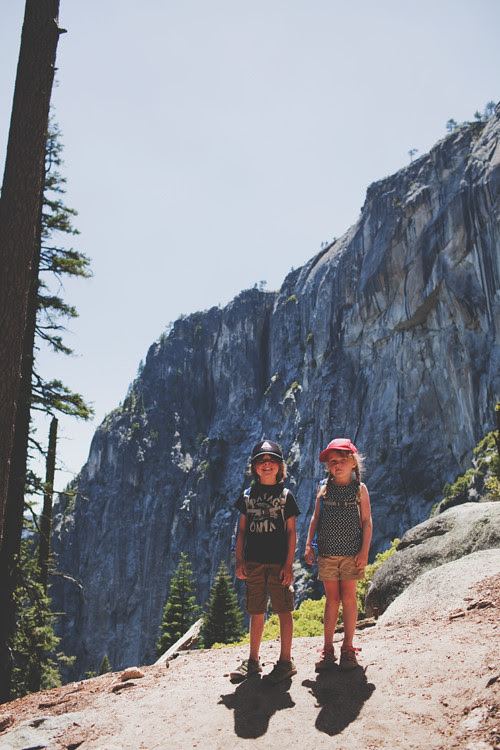 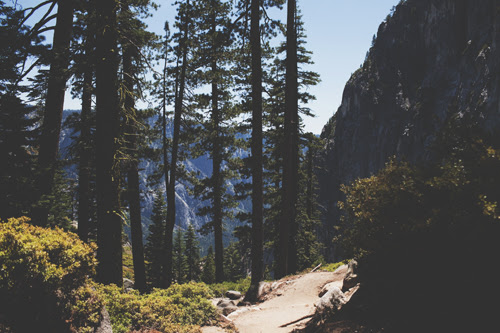 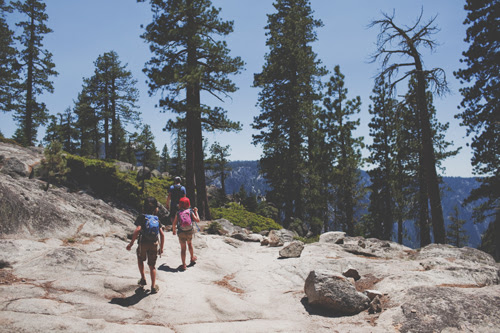 The top.
As soon as you come up on to the granite piles near the top of the falls you are greeted by other hikers eating their lunches and a light rain from the falls.....it felt wonderful.
There isn't really a "view" of the top. You get the idea of the waterfall-you're feel the water, you hear the roar, and if you peak over the edge you can see a rainbow.....and that's about it.
(BUT WE'D MADE IT!)
note: if you ever find yourself here, there is an "overlook" that we took the kids to, and then one more after a short down climb, but this one was a little bit sketchy for the kids so we decided to keep them at the first overlook. But they still felt the rain and heard the thunder of the falls so they were content. 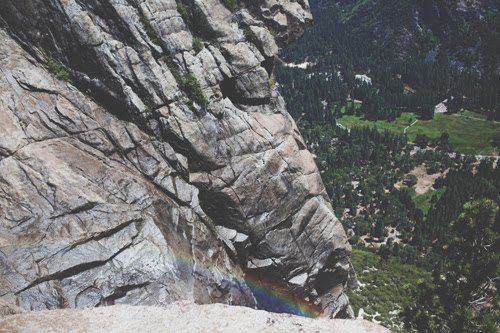 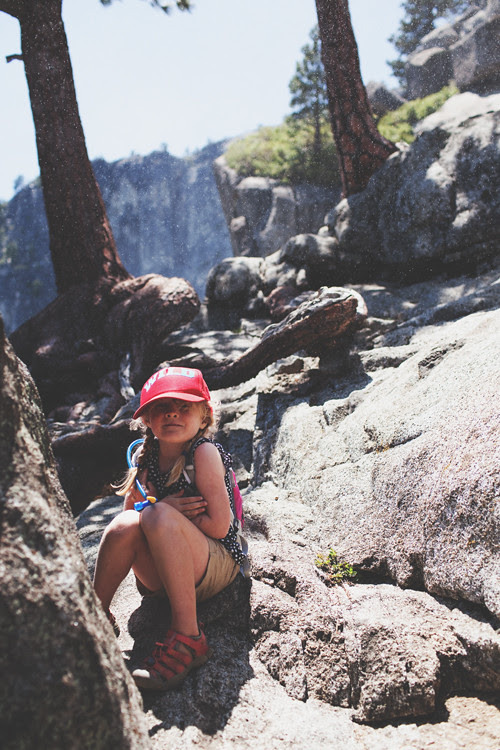 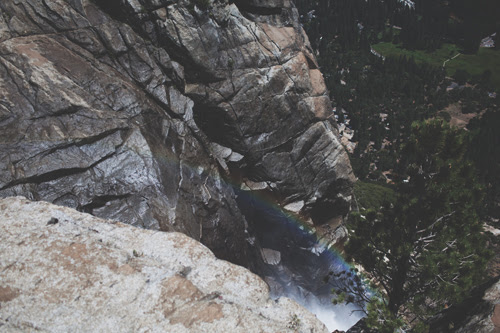 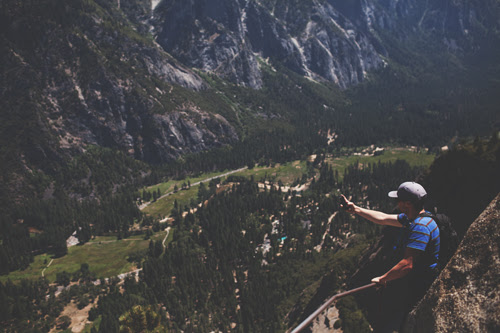 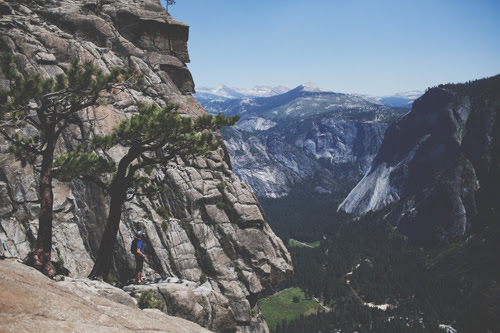 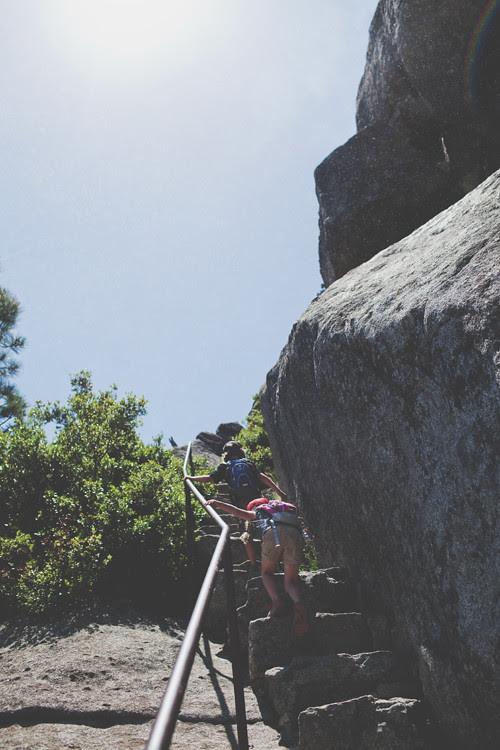 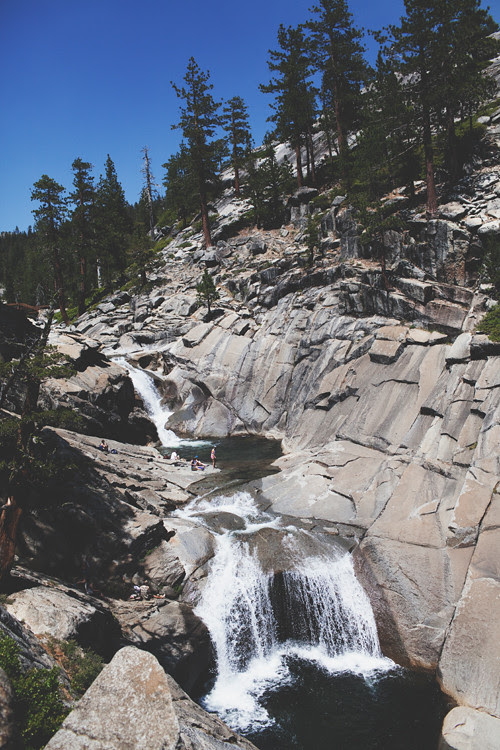 Yosemite Point
Well.
Here we are at the top......so what if we went further?
The kids had done so well without a single complaint, and Yosemite Point was supposed to be a spectacular view and was less than a mile up the mountain.
We asked if they wanted to continue.....
oh yeah....and we might have told them they could have not one, but TWO milkshakes.
They were IN.
There is a bridge that crosses Yosemite Creek and perfect little pools upstream to soak our tired feet.
We hung out in the water for a while--it didn't take long for our feet to become numb in the melted snow. We packed up and continued on. 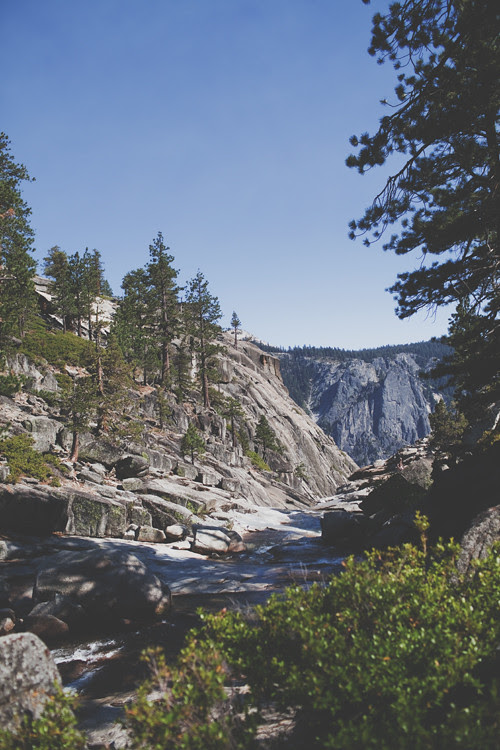 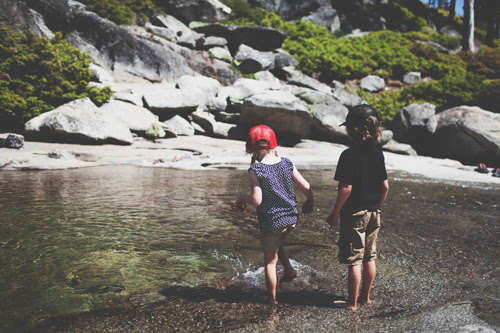 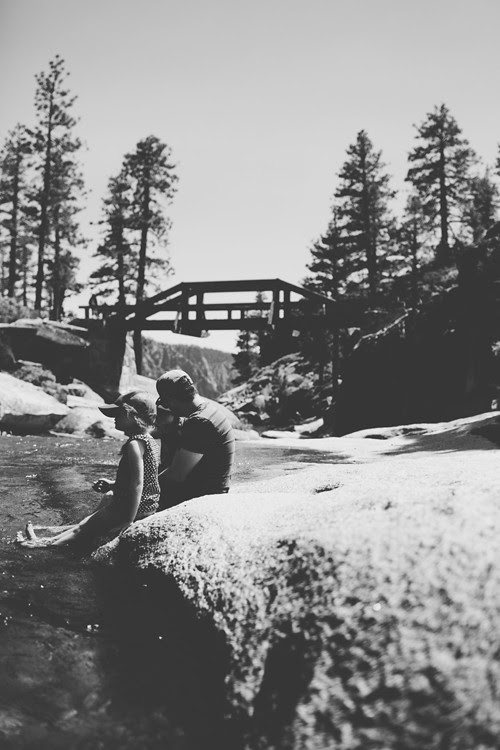 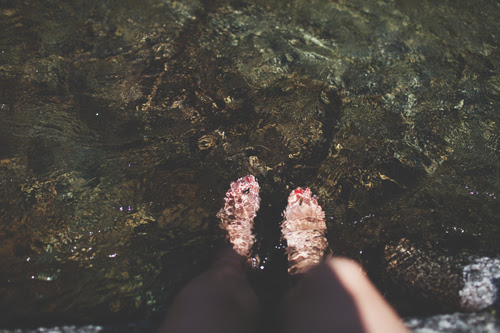 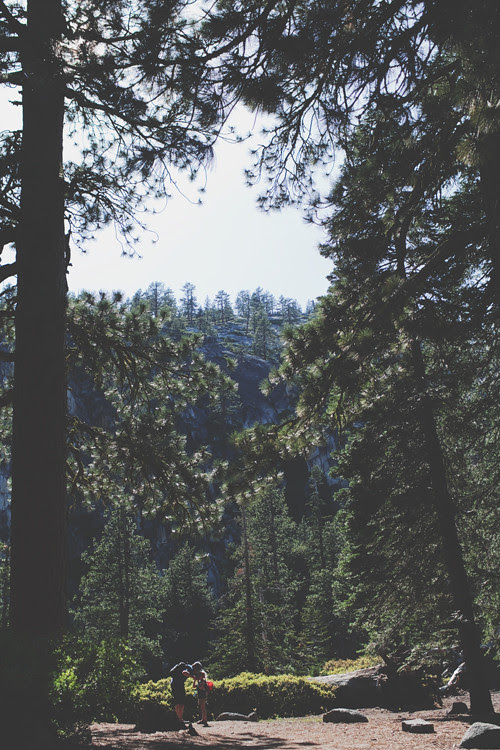 The Top:
WHOA.
Worth every extra step--we were so happy we hadn't turned around.
The view was the greatest reward (well, maybe the two milkshakes were), but either way we were so pleased that our kids had worked so hard to get us all the way up there. 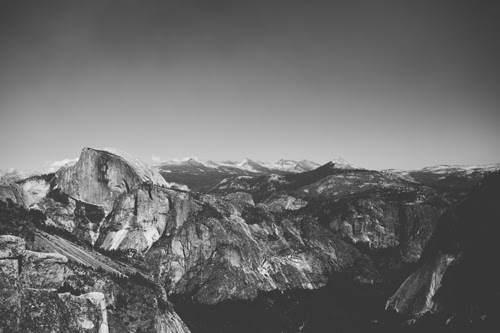 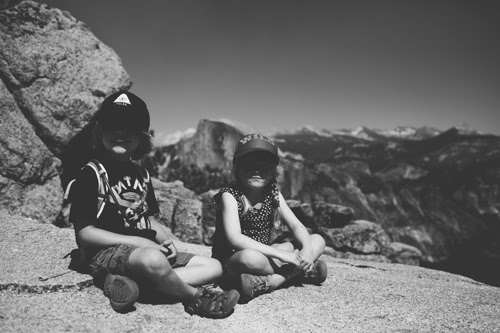 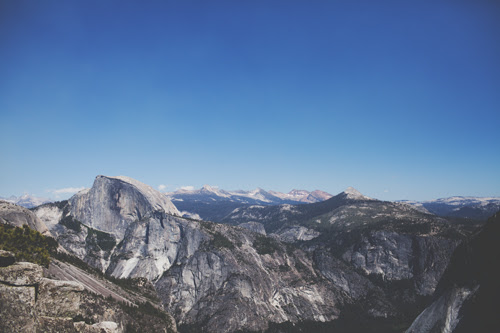 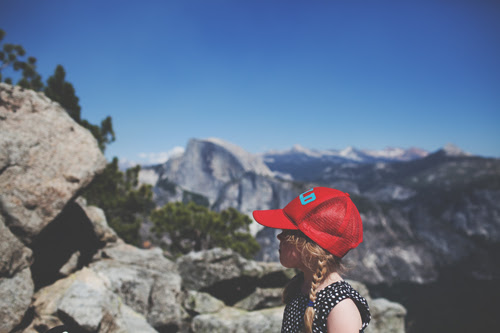 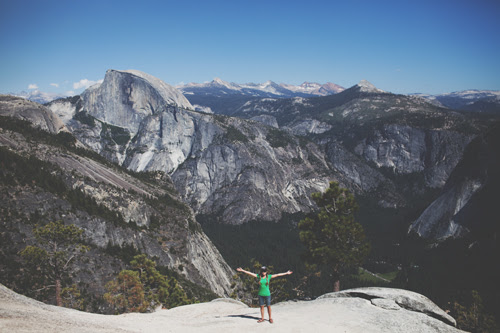 oh, and if the sweetest British tourist asks if you would like your picture taken, say "YES! Thank you!" but also say "and could you make sure half dome makes the picture too?"
whoops. 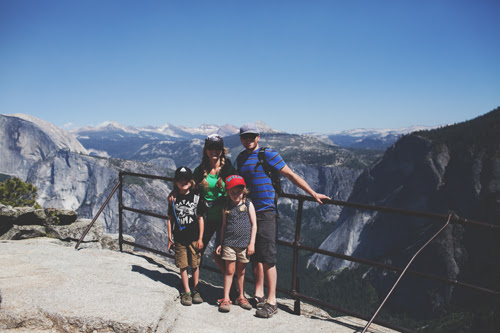 Trail Notes
Trail head: The trailhead for Yosemite Falls is just out of Camp 4 in Yosemite Valley. There is a marked trail that splits off BEFORE the falls to go to Yosemite Point.
Distance: We hiked a little over 9 miles.
Elevation gain: just over 3000ft
Time: Exactly 8 hours with several snack breaks, and a nice long break in the creek and at Yosemite Point.
Trail: steep. steep and rocky and lots of tiny granite pebbles that made for a very slippery decent.
LOTS of sunshine, so make sure you have sunscreen to reapply and more water than you think you will need.
We ate: We ate a big breakfast before we set out. We boiled some water at camp and had oatmeal, apples and cheese. We are fancy. We packed nuts, jerky, trail mix, and high calorie granola bars. I like Larabars and Probars. If you are out hiking all day please don't waste your time on cheap and flimsy bars--you need something with some substance!
Worth Mentioning: I always talk up my kids' Keen sandals. We have loved them the past few years and we have found that blisters have never been an issue as long as they don't hike with wet feet. They ARE great for hiking IN the water (like our Narrows hike, HERE), but we've found that if the kids are constantly in the water and then hiking for long periods with wet feet they will get blisters. They took their shoes off before getting in the creek, and did 9 miles without a single hot spot--pretty great!

Who has backpacked in Yosemite?
Robby has--back when he was a teenager, and I am just dying to go. ASAP.

Our two Littles were the only kids on the trail that day.....sorry, shameless bragging I know.
Kids can do hard things! We need to give them more credit, and more opportunities to show us what they are made of.
You'd be surprised what a kid will do for an extra milkshake.

more on hiking with kids HERE
Posted by sheena at Thursday, June 27, 2013

What a fun trip! Any suggestions on hiking boot/shoes for adults? My husband and I are new at this hiking thing and would love your suggestions! Kayteestice(at)gmail(dot)com

Very cool! Awesome kids!
Did you have to reserve a campsite? We tried to the day they opened up reservations for the year and stil couldn't get one!

I loved this. Reminds me of when my mom dragged me all the way up to the top of Yosemite Falls. One of my best, most proudest memories. Its gorgeous! Although, I was a bit older than your two. They....ARE awesome. Can't wait to drag my kiddos up there with me! Thanks for all the encouragement to get outdoors!

i love the view. you are so good at capturing the feeling of a place, my friend.

Your kids are super doooooper cool. I love these photos and your description of it all. I really want to go. :)

You guys are awesome! These pictures are blow me away amazing. Thank you for taking me on your summer adventures while I'm sitting here healing. I'm loving every minute of this.

Thanks for your marvelous posting! I certainly enjoyed reading it,
you could be a great author. I will always bookmark your blog and
will often come back at some point. I want to encourage continue your great work, have a nice holiday weekend!
I enjoy studying your publish. It is each useful and interesting to me. I will come back again once again to see your new posts
PAkistani chat rooms online pakistani girls and boys ,indain girls and boys,us girls and boys and Uk girls and boys chat room

bragging totally cool. i'd do it too. kids are rad.

Jealous! I grew up in California with many trip to Yosemite! I am dying to take my children there someday!

This is so beautiful. I've been to Yosemite twice but I've never been to the top of Upper Yosemite falls.. I guess I'll be going again soon because that view is amazing.

Thanks for your uplifting posts! :) I'm reading for a big exam, and couldn't follow your advice to go out and have fun for a week, so I really missed your posts. :) They bring me a lot of comfort and show me with beautiful pictures what I want my life to look like some day (when there's no exams left). :) Keep up the good work!

8 hours of hiking! Holy YIKES! That is amazing. You would have thought we were chopping our kids' toes off one by one on the .4 hike to the popular falls on the yosemite floor.

Can you write a post about camping and hiking with your camera. How do you keep it safe and what lens do you take with you when you do long hikes?

I just fond your blog and I've been blog stalking for a week. Love it!