top of the world!

It was about 10:00 when we threw the tent up under the trees. We gazed at the stars for a few minutes before we crashed...our wake up call would come early. Before the birds, before the sun, before the light even started to creep into the sky, we packed up--lights on--and headed up the trail. Four headlamps jogging through the pines, dodging rocks, shadows, and one giant moose.
The sun crept up and warmed our bones as we left the trees and entered The Meadow. 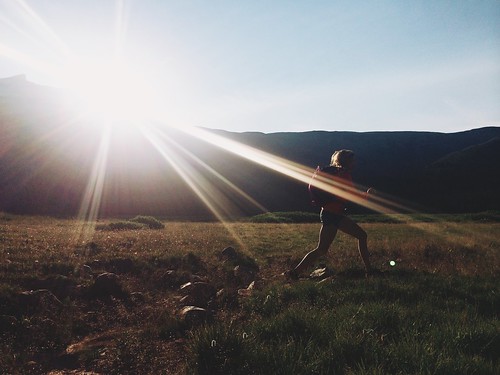 The Meadow stretched on and on and on--Kings Peak looming in the background. We passed campers still warm in their sleeping bags, step by step inching our way closer to the mountain. Well, closer-ish....it was a big meadow. 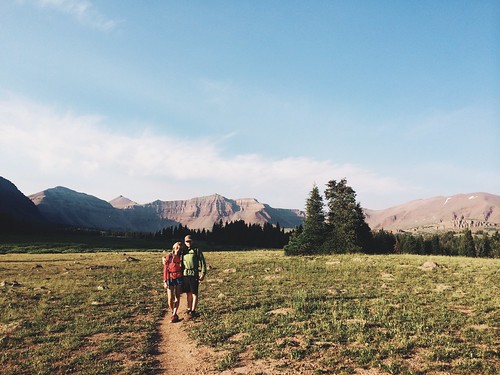 A few more miles on the trail and then we cut off--blazing our own way. Marshy grass, wildflowers, and a seemingly impassible mountain taunting us as we moved into it's shadow. We stopped and took a breather and loaded up on calories--we were 10 miles in and about to take on some serious elevation. Straight UP through a rock slide known as "The Toilet Bowl"....

see it there? dead center in the middle of the photo....it was no joke. 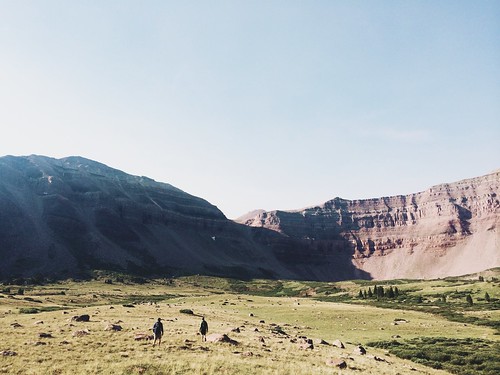 Up up up. Legs burning, lungs asking fore more air (there wasn't any), hands looking for anything to grab on to so we could pull ourselves up to the next rock. And then do it all over again.

And it went on foreverrrrrrr. 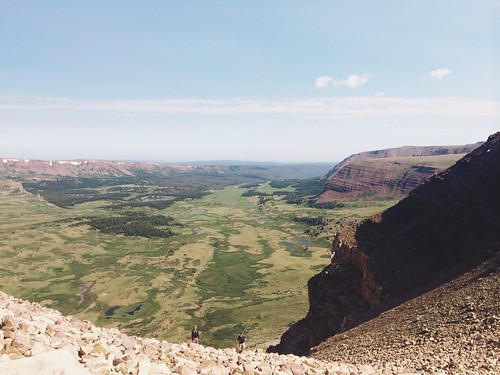 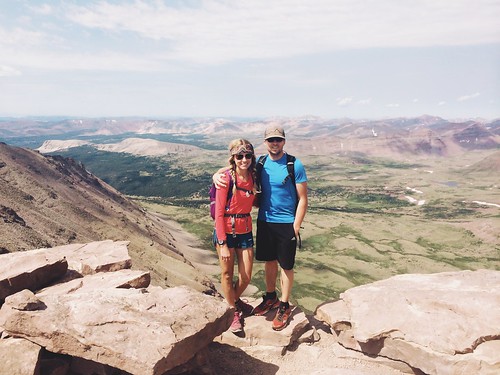 THE TOP!
13,528 feet up into the sky...Utah's tallest.
We looked out over the ancient Uinta mountains and breathed in the thin air. We stretched out in the sunshine and soaked in the feeling that you can only get when you're up in the clouds. 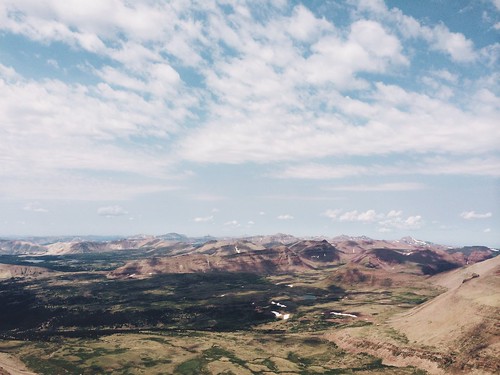 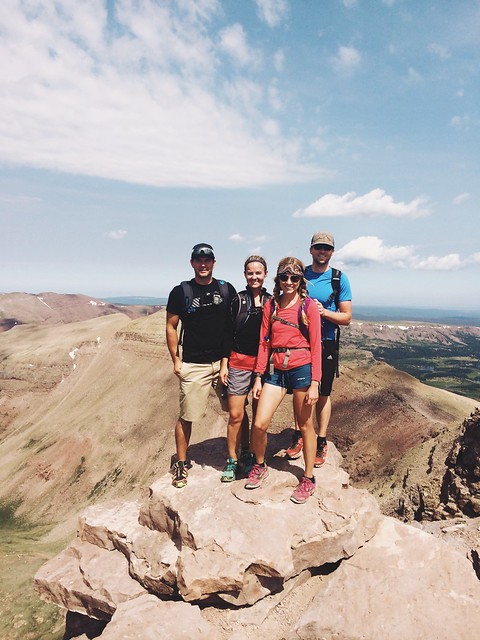 All the fun came to end when we realized we had to get back down.
oh....
Two miles of rock field--as tricky on my brain as it was on my feet. Step here? or there? ooh--that one! whooooops, that one slipped.
Rocks haunted my dreams that night. 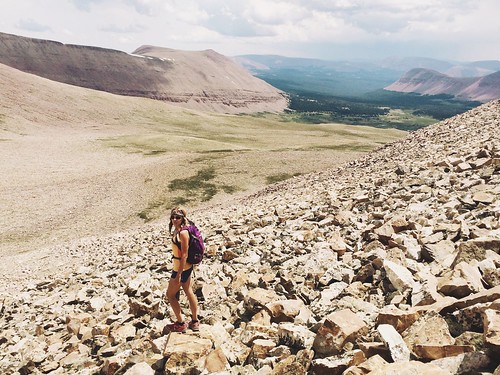 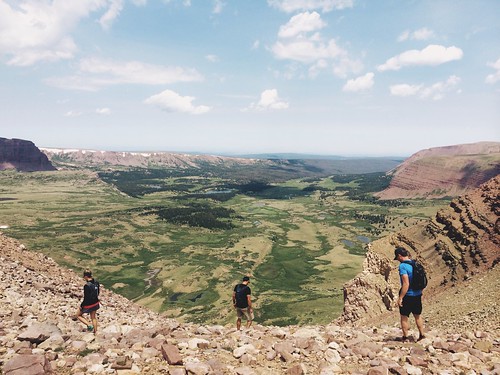 It was a long stroll back to the car. A jog through the marsh, back to the meadow, into the trees--those last few miles seemed to take the longest. 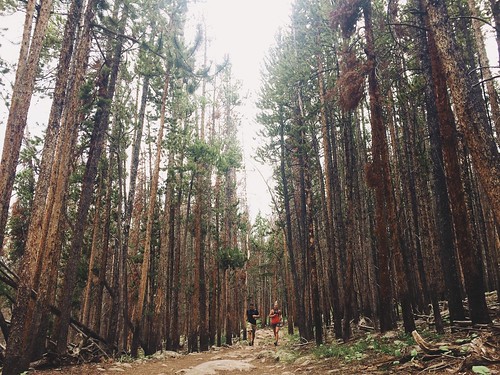 We soaked our tired legs in the icy mountain stream and rejoiced that we were DONE! We did it! So much work--but worth every step and every rock and every ache that we were sure to have the next morning.
so worth it.

“Climb the mountains and get their good tidings. Nature's peace will flow into you as sunshine flows into trees. The winds will blow their own freshness into you, and the storms their energy, while cares will drop away from you like the leaves of Autumn.”

Now let's talk food.
When you're out for an all day hike you need food. And lots of it--good calories to fuel your body so you don't crash. 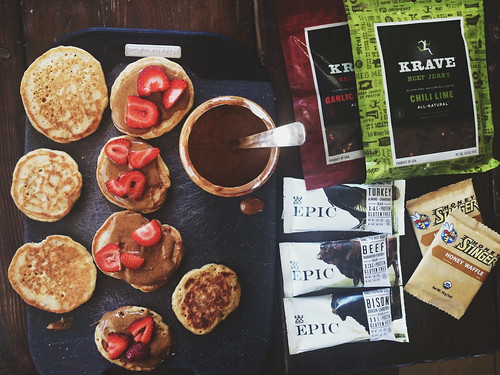 We started the morning out with my favorite pancakes (Kodiak!)--I made them ahead of time, slathered them with almond butter, a drizzle of honey, and a few strawberries, topped them with another pancake and wrapped them in foil so we'd have a quick breakfast--no prep needed--just grab and go.

This was a 25 mile hike--most people make it a backpacking trip, but we made it a day trip by running sections of it. When I'm running, I don't like anything too heavy in my stomach, so I go for Stinger Gels

, and I LOVE their  Waffles

Before we started our big climb up the rock field, I wanted some protein so we downed some Krave Jerky

. It's not hard and super chewy like a lot of jerkies--it's tender ant the flavors are AWESOME--my favorites are the spicy ones.

We spent about an hour at the top--eating, talking, and enjoying the views. I have really learned over the past few years how many calories I really need to cram in my body to keep me going on a long run/hike. I perform so much better if I keep enough fuel (and TONS of water) in me. I wanted more protein as we sat up top so we tried out
Epic Bars.
These bars interested me for a few reasons--I mean first of all, it's a bar. Of meat. All wrapped up and ready to go. But mostly because they raise their animals the RIGHT way...you know, like animals should be raised. The bars don't have weird ingredients--just meat, fruit, nuts, a few spices and then they are smoked. The taste is lightly smokey and it really hit the spot and filled my salty protein craving at the top of the mountain. The first few miles of the downhill were slow going through the rocks, so I had time to digest before we picked up the pace again--I don't think I'd eat these for a run, but they are perfect to put in your pack for a hike, and they'd make great backpacking fuel. If this sounds like your thing--go read up on Epic--they are great people with an awesome and unique product. Grab a sample pack here.

notes:
-Kings Peak is actually a 30+ mile hike if you don't take "The Toilet Bowl" route. Instead of going up the mountainy pile of rocks, you go around it. Read more here. (we started at the Henry's Fork trailhead)
-I like to drop a Nuun Tablet or two

into my water for extra electrolytes.
-you can never go wrong with a peanut butter and honey sandwich on a long hike...it's always tastes so good after you've been out for a few hours.
-I'm writing reviews for Backcountry.com if you want to take a peak at some of our favorite gear. Check it out HERE

-after you hike Kings Peak you should eat at Hi-Mountain Drug. Even if you don't hike Kings Peak, you should eat there....trust me.
-Come find me on Instagram--I'll be giving away a box of Epic Bars next week!
@_sheenarae and go find @epicbar too!
Posted by sheena at Thursday, August 21, 2014