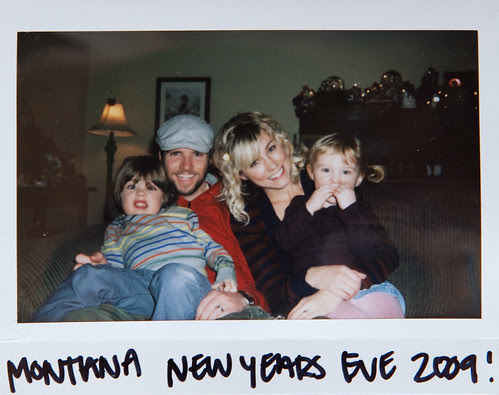 Place: Grandmas house
Time: The girl made it to 10:30. The boy 11:15. We: played games until 3ish.
Games: The boys and their nerdy xbox. The girls and my new found love for Settlers of Catan. Why have I never played this game before? Why am I still dreaming of farmland domination? Why do I some day hope to own every expansion pack. Who's the nerd now?
Food: Fondue. Fondue. Fondue. too much fondue.
Percent of evening the girl spent with fingers up her nose: 80%
What we were doing at the exact moment it was 2010 (two thousand ten? twenty ten?): playing catch phrase and trying to figure out exactly when it was in fact, 2010.
Why: do I look so much bigger than the rest of my family.
Happy New Year.
Posted by sheena at Monday, January 04, 2010

Email ThisBlogThis!Share to TwitterShare to FacebookShare to Pinterest
Labels: instax, mine, things we do

oh my gosh. we are Settlers Addicts. We played Saturday night, and last night...LOVE IT!

i love games... and i have never played settlers. i have heard about it, but never played. i will need to do that.

love the pic. so cute.

Ok. Seriously we love Settlers and are always looking for people to play it with us. Let's do it! I am way impressed that you stayed up until 3am. I don't even remember the last time I did that. I remember how I woke UP at 3:30am to leave on our trip to OR. That sucked.
PS-Here's a humorous little article about the correct pronunciation of the new year. :)
http://www.sfgate.com/cgi-bin/article.cgi?f=/c/a/2010/01/01/MN621BB41U.DTL

Hi Sheena! Love your blogs! Would you invite me? Promise I'm not a creep. You can check us out here ---> http://web.me.com/pease.pod

We love Settlers of Catan! Every now and again when we don't feel like pulling it all out for a quick game, we play on facebook. :) Not quite as fun, but you can play your friends and family far away. :)

fun times, especially when you get to be with extended family as well! the "looking bigger than the rest of my family"..its just depth perception, I noticed that when we took fam pics on the couch too, my husband looked shorter and smaller than me, and he's 5 inches taller! they must sink into the couch more..lol..your lil family is the cutest, glad you had a great holiday, I can't believe my hubby sang kareoke on New Year's Eve at our friend's party, I'm sure it will be on Youtube soon..;-p love all your blogs, woohoo!

..glad we were part of it... still laughing at 'little boy's' answers to 'catch phrase'...