You may recall, last month--I made naan.
I made it exactly as the recipe told me too, which meant no wheat flour....but I knew I'd come back and change it.
And I did...
...and to my surprise....it was good!!!
I couldn't believe how soft and perfect it still was, even with whole wheat flour!
And remember....it is SO easy!! Whip some up for tonight's dinner--you'll be glad you did!
There were alot of questions as to what you put on your naan.....anything you like! When it's hot, I really love it plain! It's perfect with curry, hummus, or honey butter too! 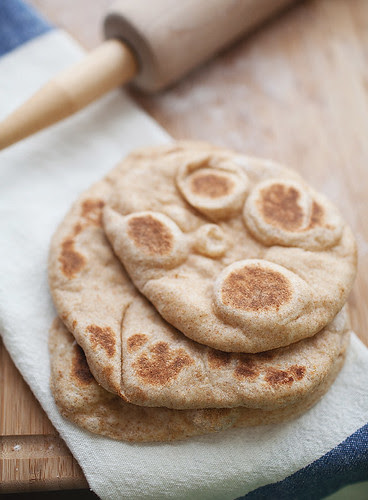 Whole Wheat Naan
1/2 cup warm water
2 tsp. active dry yeast
1 tsp. sugar
2 cups whole grain flour
1/2 cup bread flour, plus extra for rolling
1/2 tsp. salt
1/4 cup olive oil
1/3 cup plain yogurt
1 large egg
melted butter (I used olive oil), for frying
In a large bowl, stir together the water, yeast and sugar and let stand for 5 minutes, until foamy.
Stir in the flour, salt, oil, yogurt and egg and stir, then knead until you have a soft, pliable dough. Cover with a tea towel and let rise until doubled in size; about an hour.
Divide the dough into 6-8 pieces and on a lightly floured surface, roll out each piece into a thin circle or oval.
Cook each naan in a nice hot skillet drizzled with oil (just a teeny tiny bit--you're not frying it like a scone) until blistered and cooked, flipping as necessary. (When the surface has big blisters and is golden on the bottom, flip it over and cook until golden on the other side.
Makes about 8 naan.
8 yummy naan, just for you.
Posted by sheena at Monday, June 14, 2010

can't wait to try this... one of my goals this summer is to start making breads and cakes... oh it should be interesting...

This looks amazing! I can't wait to try it:)

so i was thinking of making it and using it instead of a pita pocket or flatbread wrap thingy... this work? Or am I way off track here?

i truly do need to try this! especially since we live so far away from a decent indian joint. i love the chicken curry in a hurry recipe on real simple...this naan will be the perfect accompaniment!

Ooo, naan is the one thing I REALLY miss since going gluten-free for my son. SO glad we can eat other Indian food though! I hope he'll outgrow this wheat allergy someday!

We LOVE Indian, and it's extra yummy with some delicious naan! I'll def. be trying this recipe next time I make some Chicken Tikka Masala, my hubby's favorite!

Wow. This looks so amazing. I have been trying to make whole wheat naan for so long and it never comes out well. I will definitely try this recipe. Thanks so much!

I LOVE naan, but I didn't know it was so easy to make. I will be making this very soon. Thanks for posting!

ooo so excited to try this!