In just a few days we will be celebrating our 10 year anniversary. TEN YEARS!!! I decided I wanted to recap our last ten years worth of milestones--large and small--over a few posts in the next few weeks.
So,
here we go. 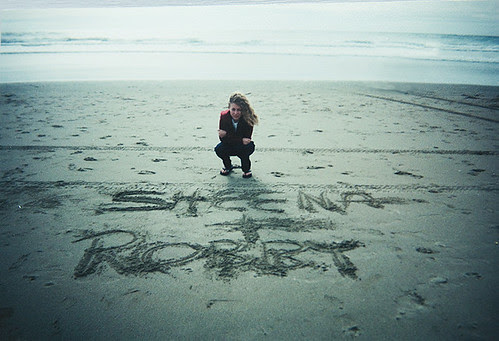 Wait--which one was four-fingered Rob again? Was he the one who asked me to move from in front of the tv because I was blocking the Tony Hawk game they were playing....?
(yes, that was him, and that was our first interaction. yet here we are, ten years later....)

I had been visiting his apartment for a few weeks--I was friends with his room mates, but for some reason hadn't met him yet.

And then it happened.

I was over at his place working on some math with friends, when we just started to talk. 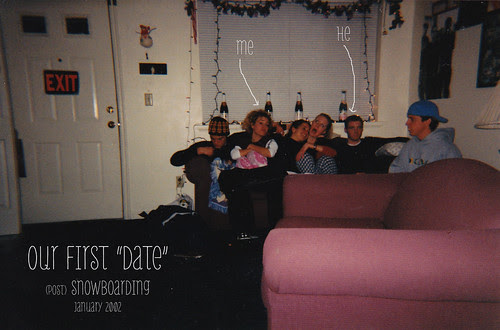 The hours melted into days into weeks into months.
We became such good friends--so quickly, and enjoyed spending time together with our mutual friends as well. We were all about fun fun fun.
We went snowboarding. I turned 19. We played ping-pong (ok so there isn't a lot to do in Rexburg Idaho in the dead of winter) Ate terrible food at JBs. We went to the 2002 Olympics in Salt Lake (ok, so we went to Salt Lake and just hung around Olympic "stuff" with our friends......what college student could afford to go to an event?) We ate a whole lot of nachos (remember this post?)
He turned 22-I made him a shirt. He worked at Franklin Covey, I called him a nerd.
He let me borrow his car, his longboard, his graphing calculator.....true love folks.

We went to San Francisco.
We climbed up a hill.
He proposed.
I said yes. (it's true!)
We picnicked in Golden Gate Park.
He played the guitar. 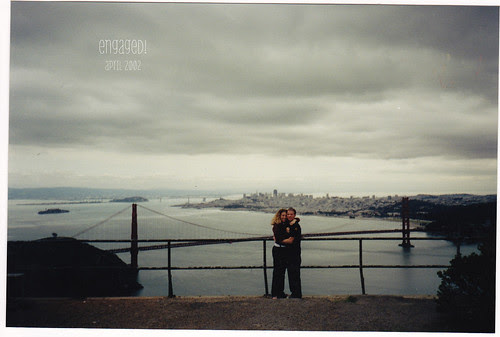 Back to school.
Twitterpated.
School's out.
Wedding plans.
Separated for 2 1/2 months.....me in Montana, he was in California.

It was TERRIBLE.
We worked. hard. Saved money. He roofed (hey Roseville friends--my husband roofed your Target!)
I sprayed weeds for the county. (yes you heard that right....hey-it paid pretty good money for a 19 and soon-to-be-married-girl.....and that's what you do in Montana, you wear coveralls and spray weeds.)

July 13th, 2002 in the Oakland, California  LDS Temple.
Married. Forever and ever andeverandeverandever.
Happiest Day.
Scorching hot.
We looked 12.
That was a mighty poofy dress. 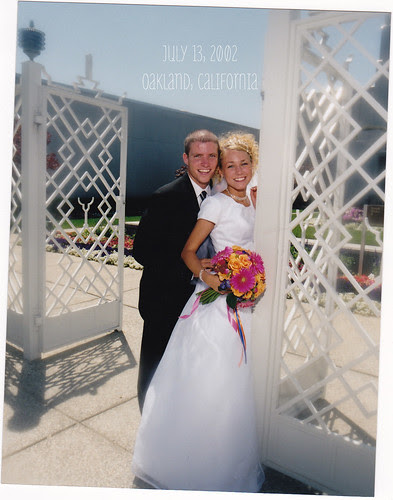 We spent time in Monterey. Carmel.
We road-tripped up to Montana. Camped in Glacier National Park.
Listening to Dashboard Confessional along the way.

And then moved in.
To our house.

This is where the fun begins.

Rexburg was in the process of going from a two year school, to a four year university. The town wasn't ready quite yet. There really weren't a lot of options for married students to live......so we kind of had to take what we could get.

And what we could get was the basement of an old house with 6 girls living above us.
Oh and other minor details like the fact that we didn't have a front door (just a piece of plywood leaned up against a gaping hole in the wall) until late October. (uh yeah.....Rexburg is cold in October).
Or the fact that the first month of living there the landlord was actually living WITH us.

But it was home....our very first.

He continued work at Franklin Covey.
I was at Sam Goody.
We went to school together in the mornings.
We took a New Testament class together.
He helped me study my Spanish.
He had foot surgery and was on crutches forrrrrrrever.
I carried his books, and used his temporary handicap parking pass.
Marriage had its bonuses.

I could barely cook.
We were poor.
But found money to snowboard, and eat cheap mexican.
And a lot of cold cereal.

We moved out of the basement--bought a condo!
We were so grown up. 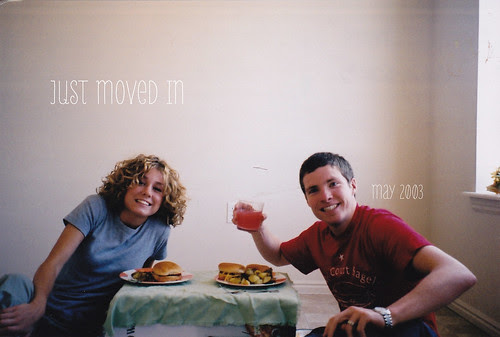 We ate our first meal in our new home.
We didn't have a table.
We covered an old couch.
Bought a house plant, because that's what grownups do.
It died.
He worked at Wal-Mart.
I worked at Target.
I finished school.
He did too.
He got a job.....in California.

Email ThisBlogThis!Share to TwitterShare to FacebookShare to Pinterest
Labels: the story of us, us

So sweet! Congrats on ten years!

Happy 10 years! What a sweet, fun life you two have had thus far :)

ps. the guy on your right is kinda cute.

aww super cool post. i don't think you've aged one bit. but your hubby on that last pic looks about 12 lol congrats on ten years!

Awwww, you two were always such a cute couple! Happy 10th anniversary!

I hope every newlywed is lucky enough to spend it in rexburg. Pretty fun stuff.

It was funny to read and I'm looking forward to reading the next episode! :)

Happy ten years.
This is so sweet!

I'm excited for your next few posts. That pic of our old apt brought back so many memories. Remember how we thought Christmas lights, blink posters, and old martenellis bottles were good decor? Lol!

im dying over these pictures. mostly because they bring back soooooo many memories of rexburg and our early married years too.

also, i flipped off those girls who lived above you once after emily and i dropped you off after our snowboarding class. sorry about that. :)

Ten years is a huge deal. Many congratulations.

Hey, we were married in the same Temple. Happy 10th!

That's such a cute story so far!! Aww.

We got married in Oakland, too! Love the pics.